A fun and all-ability running club for the local community

Until my mid twenties I considered myself a reasonable footballer, turning out for my works team on a regular basis. I would run aimlessly to try and raise my fitness levels to enable me to last the full 90 minutes, but I never really enjoyed the running bit of my training and did it under sufferance most of the time. A knee injury requiring surgical fix and rehab work signalled the end to my footballing career and it was then that I really discovered the joy and benefits of proper running. In 2007 I became one of the original members of the newly formed K2 run club under the coaching and guidance of Graham Eaton, and since then running became my chosen sport.

From regular track based running and training at K2 Athletics Track I progressed to running in WSFRL fixtures for various local clubs over the years, running a variety of distances from 5k, 10k 9 miles and beyond. I have also run a number of half marathons and the Great South Run. But by far my proudest and most memorable running achievement to date was completing the Virgin London Marathon in April 2016.

I regularly run and volunteer at our beautiful local Tilgate Parkrun. I would recommend this to everyone as the perfect way to start your weekend, whether running walking (or both) and of course volunteering.

I am a UK Athletics Licenced Leader in Running Fitness and have delivered a number of highly successful 0 – 5K beginners groups over a recent years, working with a variety of groups locally.

Next to my personal achievement running the 2016 London Marathon, I would say that seeing new runners completing their Graduation Parkrun at Tilgate comes a very close second in terms of the satisfaction that it gives me knowing that I have contributed in some way to the start of their running journey. Watching them discover their confidence and the joys of running and incorporate running into their lifestyle as a way of improving their wellbeing is hugely rewarding and never ceases to impress me.

Fun facts about me

When not running, I enjoy cycling, both road and off road, and occasional hill and mountain walking (mainly in the UK and France) and hiking around the Sussex countryside, usually exercising a friend’s hyperactive cocker spaniel!

I enjoy eating out with my partner discovering new cuisine and beers around the local areas and beyond.

Once whilst Scuba Diving in the Red Sea, I became so transfixed by the awesome wrecks we were exploring, that I forgot to monitor my oxygen gauge. I ended up having to buddy breath from the Dive Leader’s cylinder for the reminder of the dive in order to complete and return safely to the dive boat.

Good job I had paid attention during that part of the dive training or things could have ended quite differently for me, and I don’t think the rest of the group would have appreciated having to abort the dive early.

In addition to my Run Leader role I work with Crawley Wellbeing Team delivering cycle coaching to children and young adults with various learning and physical disabilities. Seeing them overcome their obstacles and challenges and master the art of riding using our adapted and conventional bikes is both enormous fun and hugely rewarding, and not really like working at all! 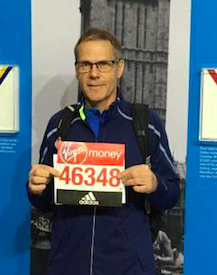